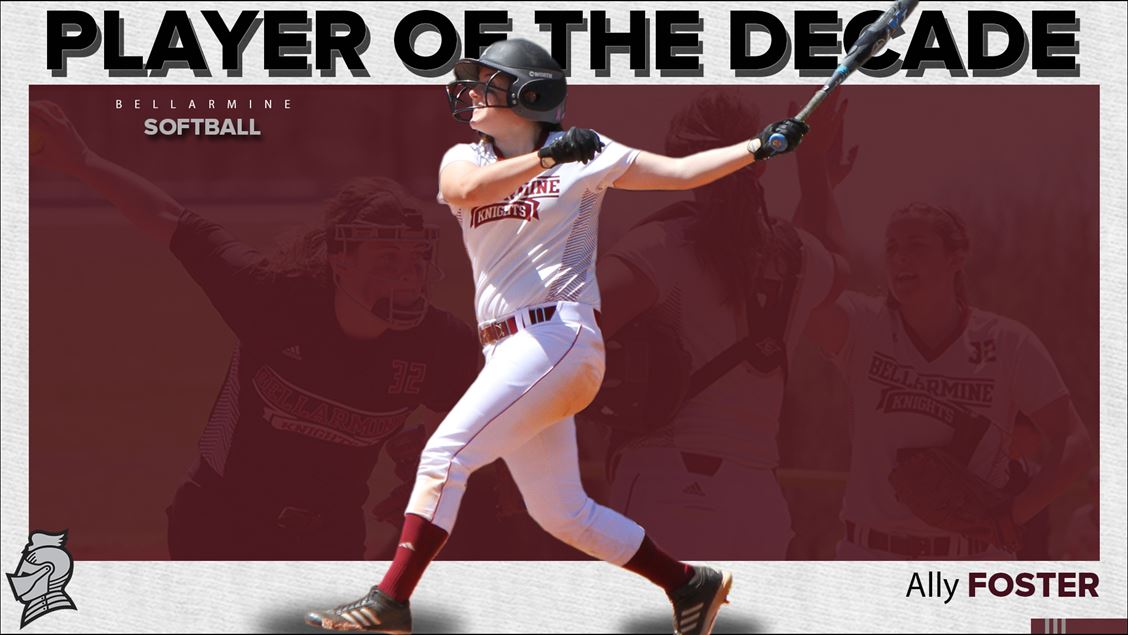 Of course, the operative word there is “if.” Most of the time, the former Bellarmine University softball virtuoso wasn’t attempting to right any wrongs, she was simply dominating entire games with her extraordinary abilities in the batter’s box and in the circle.

Foster, a two-time All-American who is arguably the greatest hitter and the greatest pitcher in program history, was voted Bellarmine Player of the Decade for Softball in an online poll.

“I am humbled and grateful,” said Foster, who played for the Knights from 2013-16. “I have to give a shout out to my family, friends and former teammates who took the time to vote. And to thank them, my coaching staff and the support staff at Bellarmine for the impact they each had on my career at BU. I feel very blessed and excited to be listed among the names of the great players selected for the All-Decade team. I was fortunate enough to play with most of them, and if not, I certainly heard stories. I’d like to propose we get this team out on the ballfield soon!”

Whoever is picking players in that hypothetical game would do well to choose Foster first. As a sophomore in 2014, the pitcher/outfielder became the first All-American in program history after earning first-team accolades as a utility from the National Fastpitch Coaches Association and the Division II Conference Commissioners Association. The Louisville native was also selected as the Great Lakes Valley Conference Player of the Year. Two seasons later, Foster capped her peerless career as a senior with second-team All-America laurels from the NFCA. The product of Christian Academy of Louisville was a four-time first-team All-GLVC honoree and three-time All-Midwest Region recipient.

“Stud,” Bellarmine Coach Renee Hicks replied when asked what immediately jumps to mind when considering Foster. “Ally was that great teammate that everyone wants to coach. She was always positive; it didn’t matter if she stuck out — which was hardly ever  — she would run back to the dugout and smile and say, ‘Hey now, pick me up ladies’ or if a teammate was down, she would be like, ‘It’s a game — just play and enjoy it.’ That’s what made her so unique: She didn’t let big situations get to her. She just played the game and had fun playing it. I so enjoyed coaching her, but mostly enjoyed watching the kid play and compete.”

She competed hard, and played well. So well, in fact, that sifting through the program record book for her name is actually a dense read.

“I dedicated a lot of time — as well as blood, sweat and tears — to both hitting and pitching and loved both,” Foster said, “but hitting will always be my favorite. I don’t know if I would have liked pitching as much if I weren’t able to try and make up for a pitching mistake at the plate! According to my parents, I’ve been swinging a bat since I could walk.”

Hicks would believe that story. Foster was a heralded recruit, with Hicks noting that she was among the top two pitchers in Louisville, and perhaps the region in general, while starring at CAL. Coming in as a freshman, Foster said her only goal was “to earn some at-bats and time on the dirt,” but it was clear much more was in store for her.

“I felt very fortunate to get her,” Hicks said. “She was a pitcher/hitter and could play anywhere on the field. Early in her career while pitching, she took a line drive back to the face, and later in her career, she had some rib issues that sidelined her for a short time. But it was hard to keep her down. She was/is so competitive in everything she does. Ally was that player that you wanted at the plate in that big inning. She would get it done for us.”

One of Foster’s most memorable days at the plate came in 2014 at the Mid-South Classic in Gaffney, South Carolina. Entering the final two contests of the Classic, Foster was mired in a rare slump, going 3 for 15 over her previous five games. In the fourth inning against Mount Olive, she launched a go-ahead grand slam — the first of her career — and Bellarmine held on for a 6-4 win. Alicia Miller, her fellow standout pitcher on the Knights, asked Foster “happy now?” Foster, still a little salty about her prior hitting struggles, responded with “not until it’s consistent.”

In the final game of the Classic, Foster smashed yet another go-ahead grand slam, accounting for all the runs in a 4-2 victory over Catawba.

“I hit the next one and I’m pretty sure I got an eye roll from Alicia,” Foster said with a laugh. “I tell this story to the players I coach now because it really shows the nature of the sport. Sometimes it is yours and sometimes it is not, sometimes you choose and sometimes the game chooses.”

Foster can’t pinpoint a specific performance of hers in the circle that really pops out in her mind. What she cherished was the 1-2 punch Miller and she provided together, which was particularly potent in 2014 when the Knights won a program-record 37 games, advanced to the GLVC Tournament finals and earned a berth in the NCAA II Tournament.

“Really the most notable and fun games I can remember were the games that Alicia and I got to split,” Foster said. “It was so fun to work in combination with her in a game, whether I was closing for her or her for me, and having Scarlett Powers’ presence behind the plate. With Alicia being a lefty along with her spin and movement, it was a tough transition for a hitter from one of us to the other. She was great!”

One of Foster’s fondest team-related recollections came from her freshman season in 2013. The Knights pulled off a doubleheader road sweep of William Jewell in mid-March where five different players homered in the tail end, thus launching the team dubbed “The Bomb Squad.” The Knights piled up 60 homers that season, most in the decade.

“That is where the BU Bomb Squad really started to gain some steam. That year’s team was a tough offense to throw to,” Foster said. “There really are so many memories, though. I am so thankful for my time at Bellarmine on and off the field.

“Another memory would be the unforgettable bus rides. Specifically, our notorious version of karaoke where you have to put on noise-canceling headphones. You cannot hear yourself sing, and all the bus hears is your voice. Shout out to Kelly Ely and her version of ‘Young, Wild & Free.’ ”

After her remarkable career at Bellarmine ended, the four-time Academic All-GLVC honoree went on to obtain a master’s degree in industrial and organizational psychology from Austin Peay State University. She lives in Louisville and works as a recruiter for L&N Federal Credit Union.

As Foster previously mentioned, she’s still involved in softball as a co-head coach of the 14U travel team Bluegrass Adrenaline.

“I have very much enjoyed coaching, teaching and learning from them!”