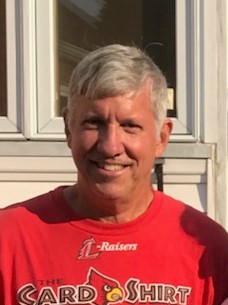 How long have you been involved in tennis? I started playing tennis when I was 14 as a freshman at Trinity. After college I continued to play USTA teams and enter tournaments. I have played at several national level tournaments even as recently as 2018.

Who have been your spiritual mentors? Early in life it was my parents who always stressed the importance of religion. Then it was various men that I met at the Saturday Morning Men’s Bible Study to develop a relationship with the LORD. Most recently it has been my children (interesting).

What are your goals for this year’s team? That every player will treat their teammates and other team players with respect and fairness. That every player will improve from their current capabilities to a level that they did not realize they could accomplish. That each person would know what they need to work on over the next 8 months to prepare for the next year’s team. That each young man will enjoy themselves so that they will play tennis for a lifetime at whatever level they can achieve. Be sure that at the end of each day the LORD would be proud of them even if they their tennis didn’t measure up. Remember that it is only a GAME.

What is your vision for the CAL men’s tennis team? To be competitive as a team in our region and in the state. To be an example to ALL other teams that CAL tennis is what they strive to be like both on the court and off.

What do you love most about coaching tennis? Seeing the improvement due to proper instruction and hard work. Seeing laughter on the court. Friendships being built through tennis.