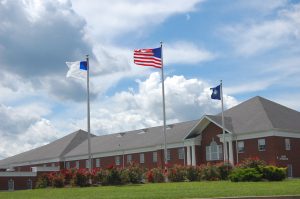 In the 1990s, with student enrollment at capacity at the Rock Creek campus, the Christian Academy Board of Directors heard God’s call for further expansion. The call was real, the resolution strong, but the means were slim-to-none.

After much prayer and petition, the Board of Directors made an offer on a local church building that would become available as the church itself was relocating to a new facility. The Board of Directors was sure expansion was necessary but ran into one dead end after another when pursuing the acquisition of this building and property. After exhausting every legal avenue possible to complete the purchase of the local church building and property, the door was finally closed due to pre-existing terms in the original deed.

Although confused by the setback, the Board of Directors diligently continued with the search for land, as they were convinced that God was calling for expansion. Then, as quickly as the previous possibility withered, new hope surfaced as a parcel of land was identified off English Station Road. The location was wonderful, the potential was grand, but the value of the property was well above the financial capabilities of Christian Academy at that time. Reluctant, but full of faith, the Christian Academy Building Committee approached the land owner with their needs and ideas about building a Christian school. God threw open the door, and not only presented the land at the owner’s original asking price (well below market value) but, through many miracles to come, paved the way for what is now known as the English Station campus.

Opening in the fall of 1998, English Station has over 240,000 square feet of building space and 64 acres of land. This facility has proven to be a blessing to families, children and our community, as the news of God’s provision, and the impact of those who serve and attend Christian Academy, has infiltrated the east end of Jefferson County.