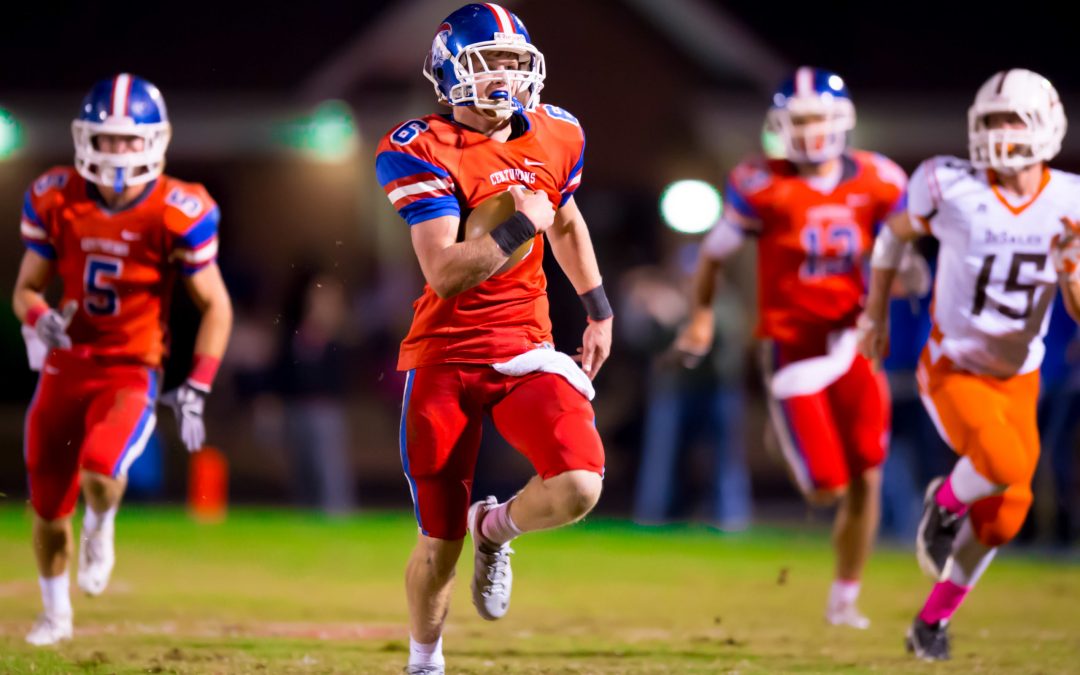 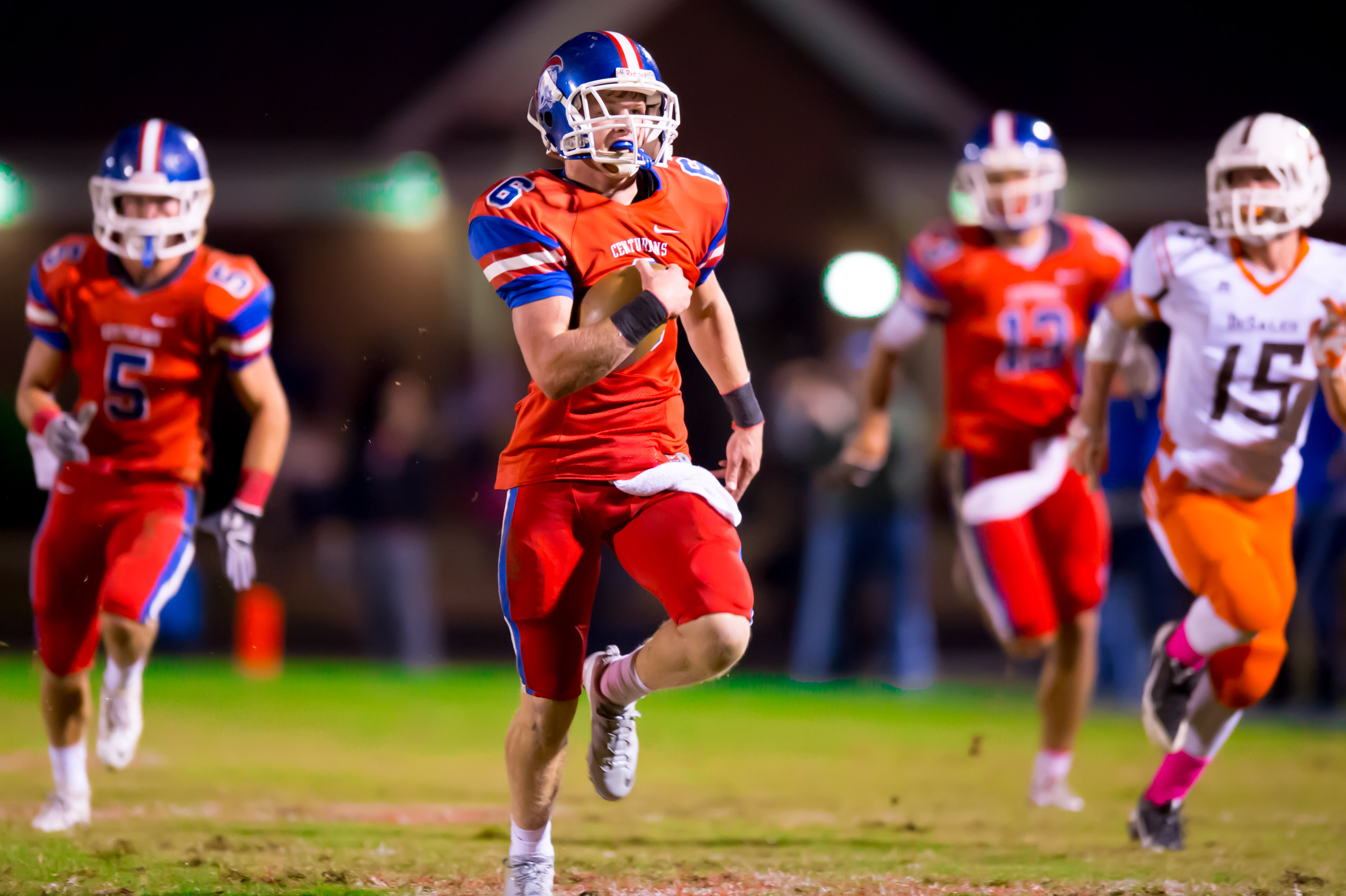 A Christian Academy juggernaut met a DeSales defensive powerhouse Friday night. A CAL defensive Masada met a DeSales offensive blitzkrieg on the same night. The game between two undefeated teams hung on the efficiency of the machine with the best clutch.

The Colts tested the CAL resolve early with a 72-yard, methodical drive, capped by an Adam Nord three yard touchdown run. Nate Smith then kicked CAL into gear when the following Centurion possession stalled. With heavy pressure, Smith managed the beautiful punt downfield. More importantly, DeSales missed the block but tackled Smith for a penalty, giving CAL second life on the drive. Nathan Christmas then handled the clutch with a smooth shift on third and long three plays later when he connected with Smith on a 55 yard touchdown to bring the game to a tie.

“I told Nathan before the game that at some point, the game is going to be on his shoulders and he’d have to make a play,” Coach LeFors said. “He did tonight.”

This was only the first gear for Christmas with more horsepower in store for an estimated crowd of 3,000. The Lewellyn brothers stepped into the clutch next for the Centurions. With DeSales up 14-7, Chad Lewellyn intercepted Rousch’s first pass of the game and returned it 35 yards for excellent field position. With fourth down on his shoulders, Christmas connected with Cal Lewellyn on a 21 yard touchdown. Nathan Bader kicked the Centurions into a 14-14 tie with his second successful point after attempt. 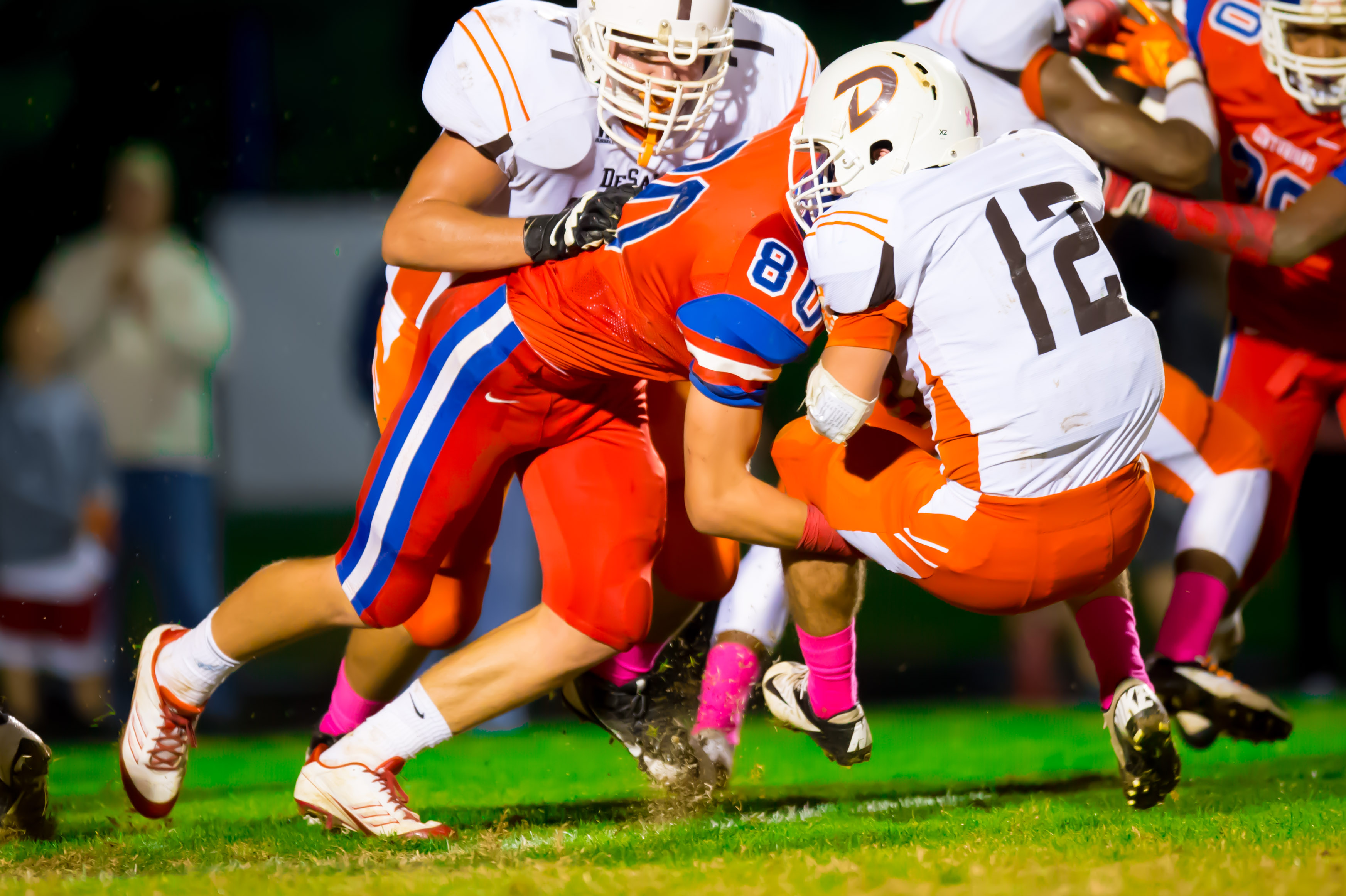 The Centurion defense put the brakes on the Colts offense with a strong line push in the middle from Zach “Bonecrusher” Page, enabling Cody Davis, Zac Passafiume, Rider “JunkYardDog” Sparrow, Michael Lagastee and Jake Paulson clear shots on the DeSales running attack to force a punt. Christmas then shifted the CAL offense into maximum overdrive with 1:58 to go in the half, completing three consecutive passes, concluding with a 19 yard touchdown to Chad Lewellyn.

The Centurion D-line shifted second half gears with a Page, Paulson and Lagestee welcoming committee for running back Dylan Byrd, halting him for no gain. Linebacker Bill Jessee, along with Chad Lewellyn and Smith made second and third down stops to force a three-and-out. Christmas and Lewellyn came through in the clutch again on the ensuing Centurion drive. Lewellyn stretched more impressively than Mr. Fantastic to haul in a 27 yard catch on third down to extend the drive.

“They caught everything I threw to them,” Christmas said.

Nick Payne then found traction on the ground behind Blake Catron and Peyton Griffee, ripping off 12 and 24 yard runs. Christmas then dumped a short pass to Payne who ran over and through the Colts defense for a 13 yard touchdown.

DeSales did not give up, down 27-14 in the fourth quarter, but neither did the CAL defense. The Colts took the ball to the CAL five yard line, going for it on fourth and two. Lagestee, Sparrow and Davis made sure he only got one and a half. DeSales then caught Christmas in the end zone for a safety, putting the CAL defense to another test. Jed Clay and Matthew Arnold brought stamina and pressure to the defense that eliminated the big play, but DeSales again marched inside the ten yard line late in the fourth. Chad Lewellyn then met Byrd on the four and popped the ball loose. Chuck Williams recovered on the five, putting the Centurion offense back on the field in roughly the same spot as the previous drive.

Christmas proved cool within the clutch of a defense that had forced a safety on the previous series. He connected on a 23 yard reception to Sparrow despite the waving arms of the DeSales D-line. The chains continued to move, as did the clock.

DeSales did manage a late touchdown with 30 seconds left, but could not recover the ensuing pooch kick or the District Four championship. CAL finished the game and 2013 district play with the championship for the third year in a row. The Centurions stand at 9-0 for the season with the 27-24 win and is unbeaten in regular season district play for three years running–and passing. 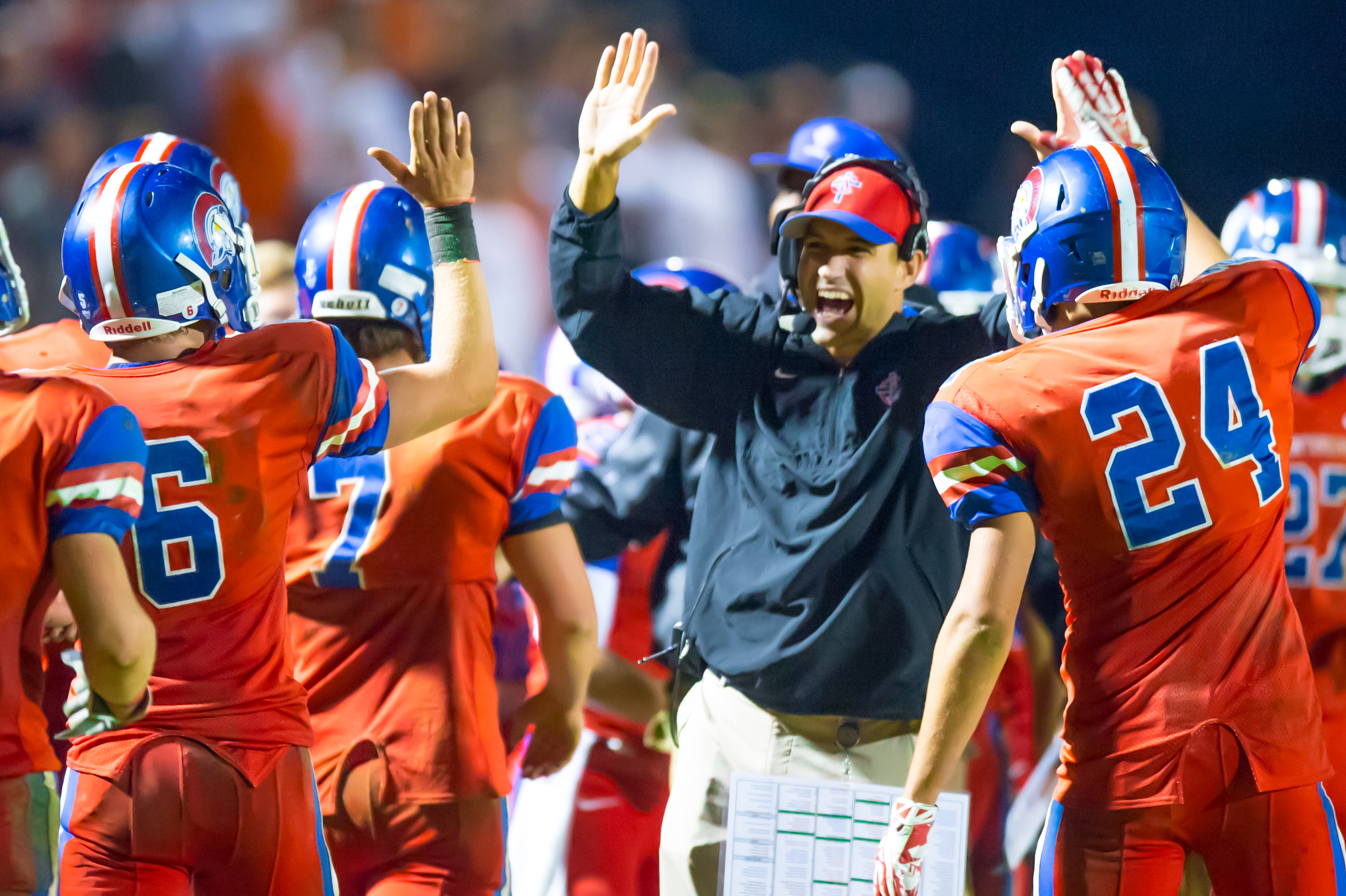 “It was a great win for our program,” said LeFors. “I am extremely proud of the guys. All of their success this season is a direct result of hard work and their will to win. I would like to thank all of the fans that came out. The energy Friday night was awesome. We need more nights like that as we press on toward the goal in the playoffs.” 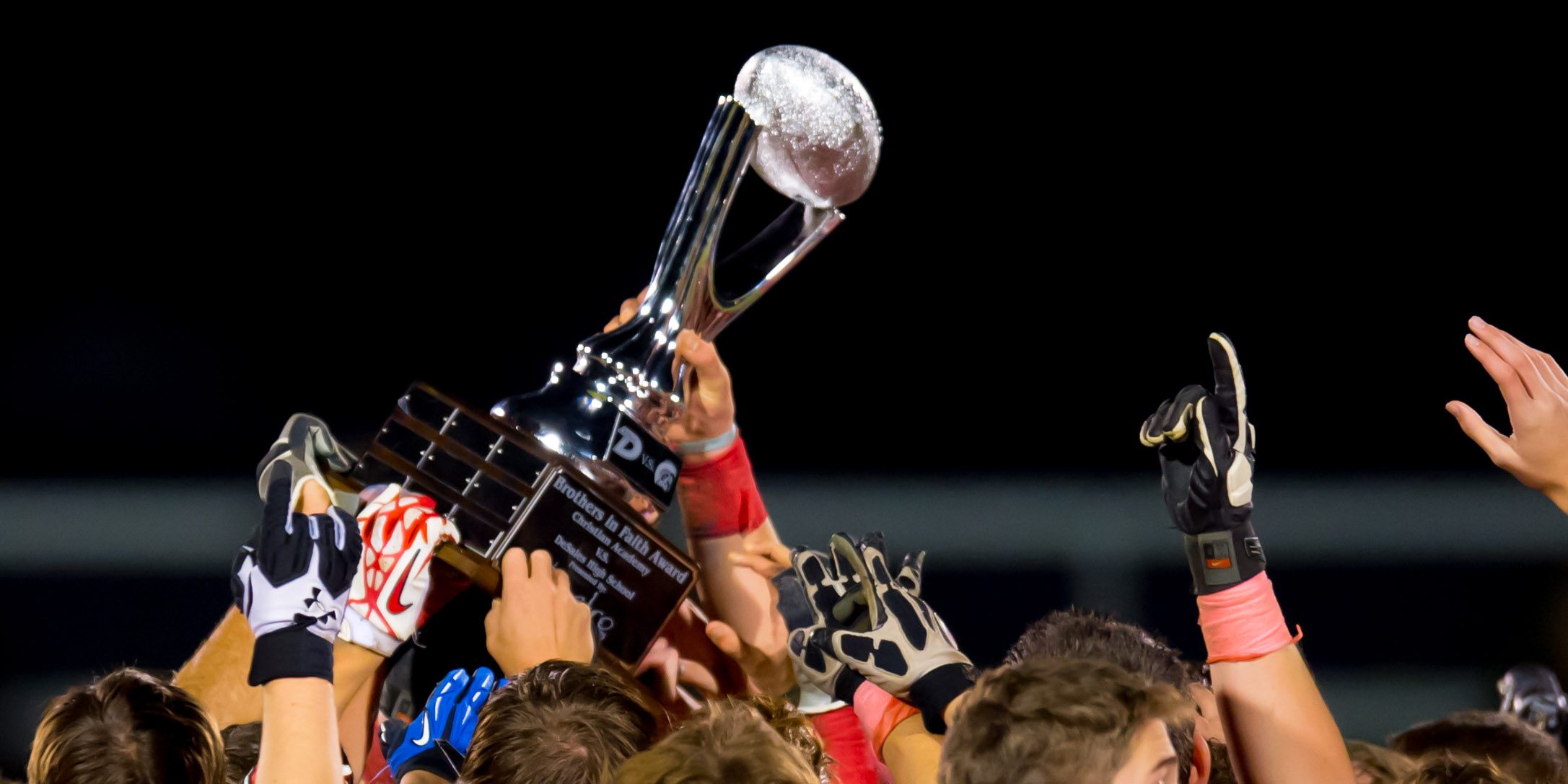 After this clash of unbeatens, CAL now heads to Male on November 1 to meet a currently unbeaten Bulldogs team that just defeated Trinity. Both teams have done their part and the matchup is sure to be another outstanding contest getting prepared for the playoffs.