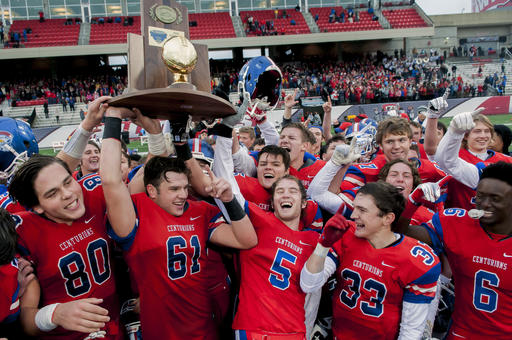 BOWLING GREEN, Ky. – Maybe it was jitters or the cold weather or the rain, but the Christian Academy football team wasn’t itself during the first half of Sunday’s Russell Athletic Class 2-A state championship game.

The Centurions led 2-0 at halftime but managed just two first downs and 63 yards of offense over the first 24 minutes of action.

“The mood in there was so down,” coach Stefan LeFors said of the locker room at halftime. “It was like we were down 28-0.”

But with the help of two stellar sophomores, the Centurions found their groove in the second half and picked up the first state title in school history.

Austin Carr threw a pair of touchdown passes to Milton Wright and Wright added a TD pass of his own as CAL defeated Danville 24-6 in front of 5,169 fans at Houchens Industries-L.T. Smith Stadium.

A CAL program that began varsity play in 1998 and lost its first 15 games now can call itself a state champion.

CAL opened this season with a 41-14 loss to Class 6-A stalwart Simon Kenton before reeling off 14 straight victories.

A 44-14 victory over eventual Class 3-A runner-up Central on Sept. 2 got the Centurions going, and back-to-back victories over 2-A powers DeSales and Mayfield sealed CAL’s first trip to a state final.

“Beating Central the way we did really opened my eyes,” LeFors said. “I knew we had a special bunch, but we still had some young guys in some key spots that had to grow up quick. Throughout the course of the year they got better, better and better and capped off a great season with a state championship.”

But it came with some struggle Sunday.

CAL punted on its first four possession and managed to get on the scoreboard first only after a high snap on a Danville punt attempt went through the end zone, giving the Centurions a 2-0 lead at the 9:09 mark of the second quarter.

Danville (12-3) managed 119 yards of offense in the first half but missed two field-goal tries and had a pass intercepted by CAL’s Ryan Lagestee.

Wright credited the coaching staff with lifting the team’s spirits during halftime.

“It was like, ‘Hey, we have something to do, and we have to do it right now,’” Wright said. “The coaches showed leadership and said, ‘We’re going to change this, this and this, and we’re going to get the job done.’”

Anteneh Thompson got CAL going by returning the opening kickoff of the second half 38 yards to the Danville 47-yard line. Six plays later Carr found Wright on a post route for a 27-yard touchdown pass. Wright bounced off two Danville defenders at the 10-yard line before getting into the end zone.

“Milton is one of the best receivers in in the state, and we work well together,” Carr said. “We’ve been working for this since the seventh grade, so I knew when coach called the play who I was going to throw to.”

CAL put the game away early in the fourth quarter. On fourth-and-goal at the 7-yard line, Wright lined up at quarterback in the Wildcat formation. He rolled to his right and found Nick Weaver for a touchdown pass and a 24-0 lead.

It was the second TD pass of the season for the versatile Wright, who scored touchdowns multiple ways throughout the year (17 receiving, four punt returns, three interception returns, two kickoff returns and one rushing).

“Coach called a little pass play, and I was like, ‘Oh, OK, let’s do it then,’” Wright said with a smile. “I’m glad I got to get the ball to Nick Weaver, and he got the job done.”

For LeFors, the former University of Louisville quarterback, it was a thrilling finish to his sixth season as CAL’s head coach.

“You hear so many other champions say it: ‘Once you get that first one you’re so much more hungry for the next one,’ so I am,” LeFors said. “But I definitely want to enjoy this one with these guys.”