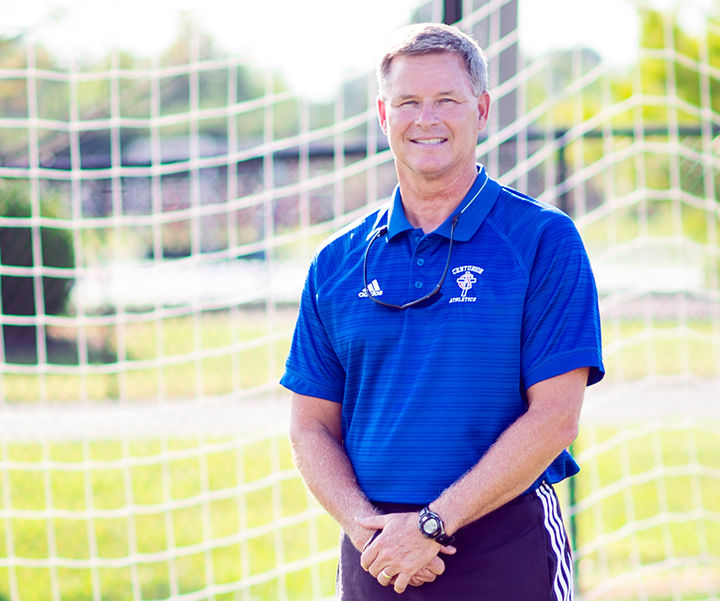 Christian Academy of Louisville’s girls soccer team is undefeated and ranked No. 1 in the state, but for head coach John Zutt, soccer is about more than just wins and losses.

In fact, he doesn’t even know his team’s record.

“He doesn’t focus all his attention on soccer,” said player Olivia Lawson. “Something special he does is he’ll take five to 10 minutes to talk about the sunset. It’s just like the little things he brings to practices and games. He always tries to help each of us grow in our faith and at soccer. He has a perfect balance between a coach and a role model.”

A four-year starter, Lawson has played for Zutt through great victories and heart-breaking losses.

Zutt emails his players a devotional each Wednesday and Sunday night.

The Centurions are 12-0-2, and three players have committed to play for Division I schools. As expectations of remaining unbeaten and winning a championship rise, Zutt’s goal is that his players, opposing coaches and players, fans and referees experience Christ.

“I have been incredibly blessed over the past 16 years coaching to help our teams come together each season to train and compete at the highest level possible and to use the platform of athletics and our talents to impact others for Christ with every opportunity,” said Zutt, a Southeast Christian Church member since 1997.

As his daughters grew up, Zutt helped coach their club and youth soccer teams.

When his two oldest played at CAL, Zutt cheered for his girls from the stands, but then the chance to coach came knocking.

“Our youngest daughter, Kara, was a sophomore and the coach at that time was from England and relocated back home,” Zutt said. “They needed someone to take over and coach. The school reached out to me. The intention was to try to step in and coach for a year or two. It’s been 16 years.”

Zutt also coaches his granddaughter’s soccer team at Southeast, and the CAL team puts on a one-day youth clinic for players and coaches at Southeast to kick off the season every year.

Emotions can run high on and off the field during games, but Zutt said his players share their Christian witness by staying composed, yet playing competitively.

“I have a huge amount of respect for them to play in a very physical and competitive environment and to always stay composed,” Zutt said. “To know they are carrying a bigger responsibility. You can have a warrior mentality, but have a Christian witness about you throughout the game.”

Before games, CAL’s 20 soccer players each write “BHS” on their wrists, which means “By His Spirit,” taken from Zechariah 4:6, which says, “Not by might nor by power, but by my Spirit.”

After every home game, they invite the other team to pray with them.

“When we go on the road, I’m often reminding the girls that we are representing not only our school, program and families, but our faith,” Zutt added. “To be a beacon of that every time they go into a game situation. They have an opportunity to impact someone or many with how they handle themselves throughout the course of a season.”

That sentiment is easy when games are going well, but harder when adversity strikes.

“There’s going to be adversity through the course of a season through injuries and things that don’t go as planned, but to come together and persevere is something individually and collectively as a team we talk about,” Zutt said.

That adversity came early on.

On Aug. 19, CAL was playing No. 1 team and defending state champs, Sacred Heart Academy. It was a tight game and during a physical play, CAL’s goalkeeper hit her head and had to sit out to go through concussion protocol.

The team with seven seniors, six of whom have been four-year starters, united together.

“I challenged the girls to rally around, and we had a field player step up and move in as goalkeeper,” Zutt added. “She did something she didn’t really want to do … and we played through that as a team.”

CAL won the game 1-0 and gave Sacred Heart its first loss to a Louisville opponent in nearly four years.

It’s been a sweet 16th year for Zutt and his team, but the reward isn’t in their record.

“Regardless of our record, our next game up is our next opportunity,” Zutt said. “I challenge the team to be the very best version of themselves for a full 80-minute game. If they do that, more times than not, the result will go in their favor.”

The Centurions have one regular season game left before tournament play starts.

While CAL sits at No. 1 in the state, Zutt says his No. 1 fan is his wife, Susan, who stands by him in complete support.

“I’m grateful for my greatest blessing, my wife, and the sacrifice she makes during every season,” Zutt said. “Susan is the first person I look for after a big victory, and she’s also the first person there in those tough losses.”