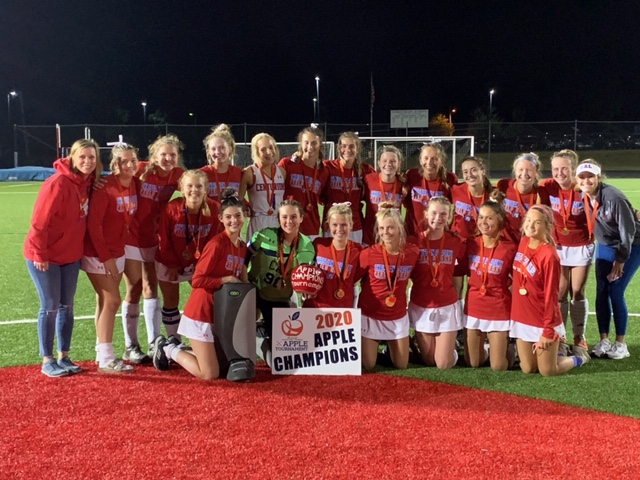 CAL was matched up with Mercy Academy for a Friday night. Shortly after halftime the Centurions the score was 10-0 and the game was over. Saturday offered a rematch from a week earlier where CAL knocked off the defending state champion Assumption High School. Could the Centurions defeat the aggressive Rockets twice in one week? CAL struck early and has Assumption on their heels, carrying a 2-0 lead into halftime.  But, as they are known to do, Assumption fought back and made this one very tight. In a tight third quarter the action flowed back and forth, before Assumption narrowed the CAL lead 2-1 and appeared to regain some competitive fire. CAL responded in short order with a beautiful goal by Elise. The CAL faithful breathed a sigh of relief, thankful to regain a two goal lead. It turns out they needed it because Assumption struck again on a breakaway goal to bring the score to 3-2. The CAL defense locked down and fought off the charging Rockets to hold onto a narrow 3-2 victory to set up another rematch with Sacred Heart Academy for the coveted Apple championship.

The championship game did not disappoint in a hard fought back and forth between SHA and CAL, that ended in a 1-1 tie at the end of regulation. The Centurions, playing their 5th game in 7 days fought with every ounce of their being. With time running out in the sudden death overtime period, Anne Marie Krebs broke away and knocked in the winning goal. The Centurions are Apple Champions again for the first time since 2017 (coincidentally the last year they won the state championship)! 5 games in 7 days. 5 wins in 7 days. Double wins over the last two state champions.