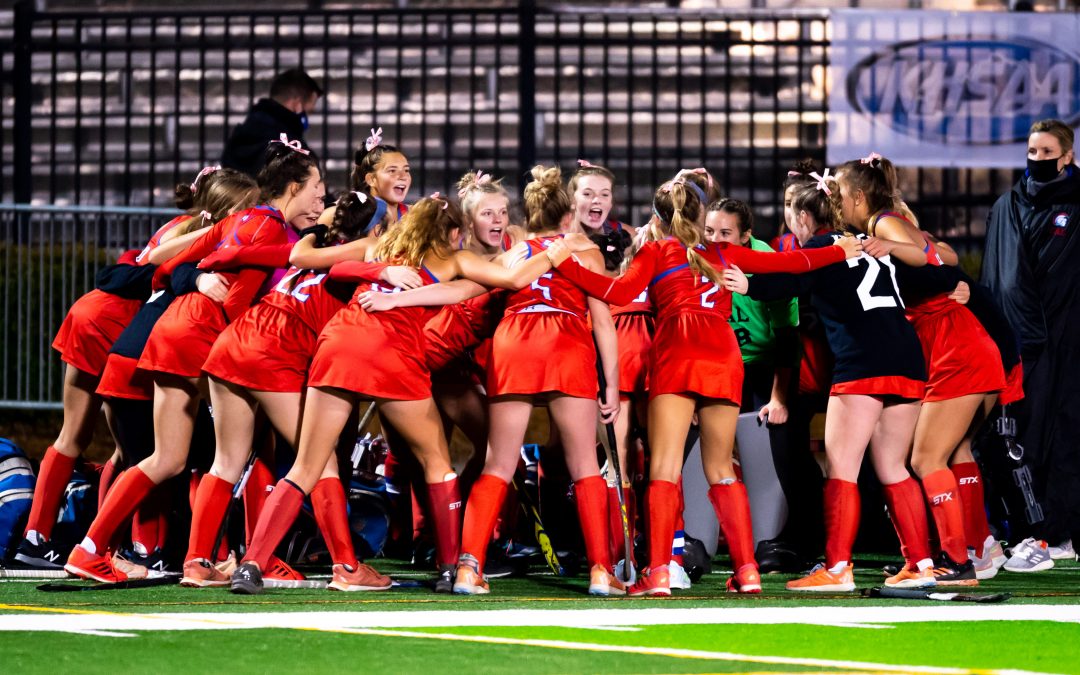 But just 4 hours before the start, the KHSAA called off the game due to a player testing positive after the semifinal game between KCD and Sacred Heart. Contact tracing and a two and half week delay ensued. It was a tough blow for a team that had regained momentum and seemed poised to take home the trophy.

November 12 arrived and CAL lined up against Sacred Heart Academy for the fourth time this season in front of a sold out crowd of 650 masked fans. CAL struck first, with a goal by Claudia Thomas early in the second period. Thomas dribbled into the circle, heavily defended on the right side, and somehow slipped the ball through two defenders and past the keeper into the left side of the cage. The CAL faithful erupted, thankful to be watching field hockey again and elated to have the lead. The game momentum seemed to shift back and forth throughout the next two quarters, until midway through the fourth quarter when SHA intercepted a pass and quickly scored to force a 1-1 tie that would lead to yet another overtime.  Early in the overtime period, call forced one of just two corners in the game and nearly scored to bring home a sudden victory. Shortly thereafter SHA was awarded its 11th corner of the game and scored the winning goal, putting an end to CALs amazing yet strange season.

Although this was not the result they hoped for, this squad can be proud of their accomplishments in a tenuous season that many thought unlikely to even happen. Despite COVID19 related delays at the start and end of the season, this squad stayed focused and persevered through numerous injuries, cancellations, and setbacks to become one of the most successful and decorated teams in CAL history. They were a force to be reckoned with whenever they stepped on the field. Though 2020 has brought many difficulties and frustrations, this CAL field hockey squad and season has a been a bright spot for all involved. Endings like these seem unavoidably hard, but this team is a great reminder of how there is much to be thankful for, even in the midst of loss.