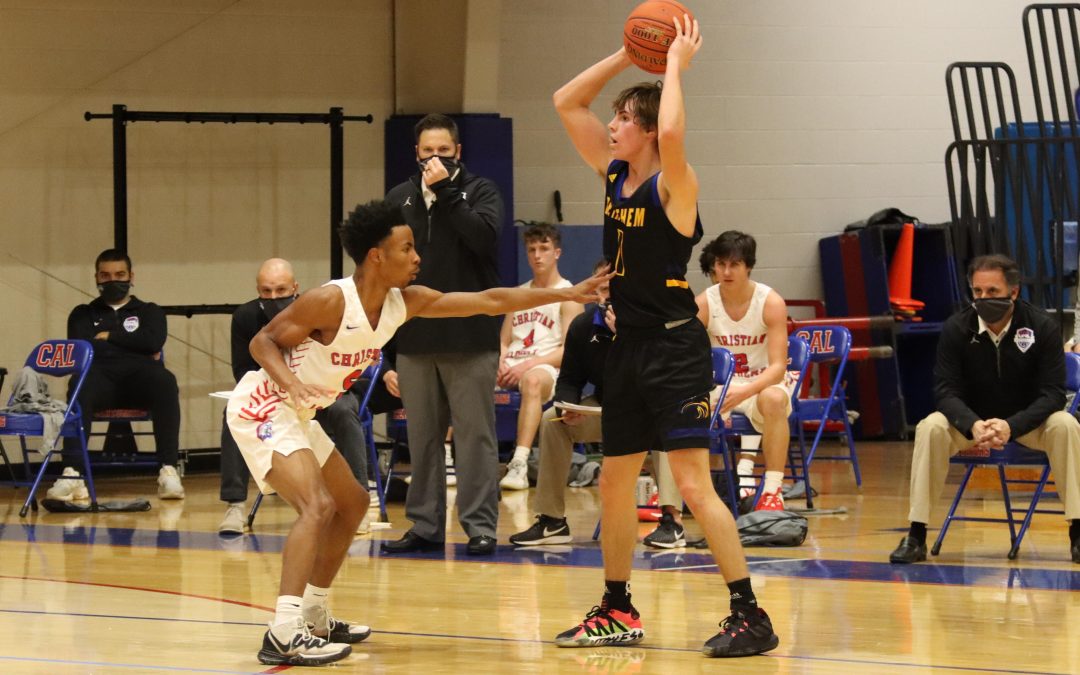 After a six week Covid delay, our varsity basketball team finally took the court to begin the 2021 season. New coach Aaron Hill was excited to start back in November, but all games between Thanksgiving and the first week of January were canceled. Coach Hill and Athletic Director Brad Morgan tirelessly worked the phones to rework a nearly full
schedule beginning January 4th.

CAL’s offense exploded for 90 points in a 32 minute game. We hit 55% of our shots and seven Centurions nailed at least one three pointer. Bethlehem had no answer for big man Stephen Wearsch who hit 9 of 10 shots from the field for 20 points and 13 rebounds. Sophomore sensation George Washington scored 23 points, hitting three shots from beyond the arc. Senior Brayden Daniels hit three treys as well en route to 14 points total. Hodge scored 6. McClure scored 6. Erhardt 7. Lagestee 5. This game was never in doubt as CAL’s confidence grew as the game wore on. We ended the game with a barrage of points scoring 52 in the final 16 minutes to pull away by 30.

January 8th    CAL 85  Holy Cross (Covington) 86
In our first true road game up on the river in Newport, CAL almost stole a victory from a good Holy Cross team, losing a heartbreaker by one point. After a lackluster first half which saw our boys down by 6 or 7 points most of the time, coach Aaron Hill fired the boys up at halftime and we came out with a chip on our shoulder mounting a comeback that almost resulted in a victory. Captain Brayden Daniels was feeling it from deep. Daniels hit 6 three pointers en route to 21 points on the night. Newcomer Luke Erhardt proved his mettle scoring 13 points and hit several key free throws during our fourth quarter comeback. Tyler Lagestee calmly hit 3 three pointers at opportune times to help tie the game late. Stephen Wearsch took it upon himself to score 15 points alone in the third quarter including several old fashioned three point plays. He finished with 19 points. George Washington contributed 13.

CAL tied the game at 85 all with 10 seconds to play. It looked as though the game was going to go to overtime. We would have had a distinct advantage as Holy Cross lost a key guard to fouls and we had big momentum as well as no foul trouble for most of our key contributors. But, alas, the referees never let that happen. As time expired, the referee blew the whistle as two players fought for a rebound. Foul on CAL. Two shots for Holy Cross. He made one. Game over.  A bitter pill to swallow for sure, but CAL proved they would never give up no matter what. This lesson learned would prove monumental the very next night.

January 9th   CAL 73  Newport Central Catholic 63
After the painful loss the night before, CAL found itself in the same position against NCC. We were behind for three quarters. Down 6 at the start of the fourth. But this time we would not be denied the victory. CAL put it all together, mounted a comeback, and pulled away for a 10 point victory.

Maybe it was the seniors only meeting at BW3’s the night before, or maybe it was the meat and cheese they ate, but no matter, CAL was bent on stealing the win.  Senior Conner Haun exemplified this winning attitude with his hustle play. Conner dove, kicked, and scrapped his way to numerous deflections and rebounds, drawing fouls, and getting to the free throw line. He finished with 8 points and many rebounds. George Washington introduced himself to Kentucky high school basketball by dropping 33 points and hitting seven 3 pointers. He will be a force to be reckoned with over the next several years. Brayden Daniels chipped in 6 points. Wearsch scored 9 second half points. Lagestee, of course, hit another 3 pointer. Erhardt scored double digits for the second straight game netting 10.