Congratulations to the CAL women’s basketball team who won their third consecutive 2A State Title this past weekend in Owensboro. The Lady Centurions defeated Rowan Co. 62-54 in the championship final, setting the record for the most points scored in a 2A girls championship game.  Also, congratulations to Jaya McClure for being named tournament MVP, as well as all-tournament team.  Mariah Knight, Abigail Embry and Savannah Gardner were also named all-tournament team. 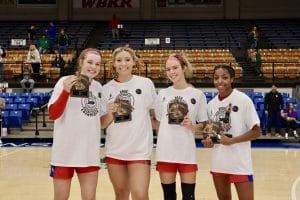