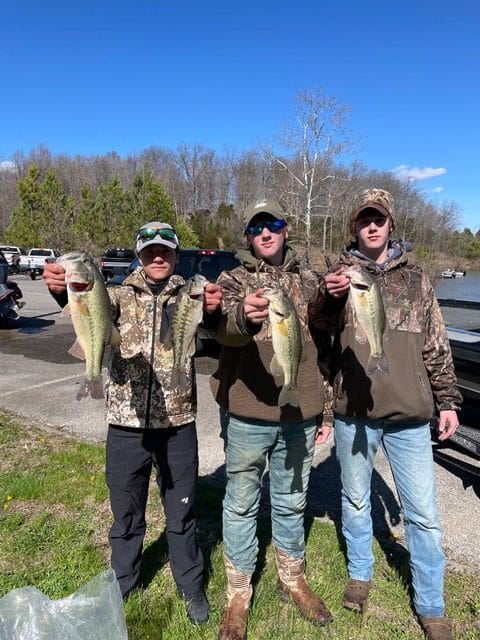 From busted tires to bonding on the lake, CAL’s new bass fishing team has already treaded through the ups and downs of an entire year.

“For a lot of them, they didn’t realize how technical bass fishing can be,” CAL coach and team founder Thomas Peck said. “There are things like learning how to read electronics on your boat and using sonar that make it more in-depth… but they’ve learned a lot.”

Peck first got the idea to start a bass fishing team at CAL two years ago while attending his son Hayden’s open house. Despite loving the school, it bugged both Peck and Hayden that CAL didn’t offer bass fishing but St. Xavier, Trinity and DeSales did.

Peck grew up learning how to fish from his father and passed it down to his own sons. He fell in love with competing in bass fishing tournaments and running a series for the Fishers of Men National Tournament Trail — a ministry who aims “to introduce Jesus to fishermen and their families and to invite them into a relationship with Him, through bass fishing tournaments,” per the organizations mission statement.

Peck was determined to bring the same message to CAL so he insisted on creating a squad. But was CAL interested?

Despite it being their first season, the Centurions wanted a team for years. The KHSAA only sanctioned bass fishing in 2012, but 10 years later, the sport has expanded to 126 schools statewide.

Jefferson County is slow to adapting bass fishing, however. The only schools in the county that participated were Trinity, St. Xavier, DeSales and Fairdale. CAL felt left out, especially since there were students who had real potential for the sport.

Senior Landon Donahue started fishing with his grandpa when he was young. Donahue’s grandfather was a semi-pro bass fisherman who taught him the importance of preparation, patience and how to pick a fish out the water. For years he wanted to utilize those skills.

Heading into his senior year his wish was granted.

“I’ve always enjoyed the sport so when I heard CAL was getting a team I really wanted to join,” Donahue said. “I loved going out fishing with my dad or watching him and my grandpa come home with a big bass. I thought it was so cool.”

Not all of CAL’s anglers are as experienced as Donahue, but that hasn’t stopped the team from improving throughout its first month.

Freshman Ethan Zunbrunnen said that he loved to fish but never did it for competitively. He enjoys it to relax, so performing under pressure is a new experience for him.

“There’s a lot of good things about doing this as a team,” Zunbrunnen said. “There’s other people to help you. I had to adapt to waking up at the same time and going to the same place but other than that there’s been things that are the same.”

Bass fishing requires anglers to go out on a boat for eight hours and bring back their five heaviest fish. The most weight wins. Last Saturday, the Centurions competed in their first bass fishing tournament and faced adversity out of the gate.

“One of our guys was putting his boat in the water and his tire popped,” CAL angler Lucas Bischoff said. “So he was pretty late because he had to go get a new tire to pull it back out.”

Things got worse for the team. Since the waters were cold and muddy, nobody on the team caught more than two fish. It wasn’t the start the team was looking for, but that didn’t take a way from the thrill of the afternoon.

It’s still early for the team and Peck expects there to be ups and downs throughout the year, but he sees an excitement in the team and a willingness to improve. He knows CAL can build something special but it’ll just take patience.

“We not only want them to grow in wisdom, stature and favor as men of God, but we also want them to win some fishing tournaments,” Peck said. “And they were upset. They want to win.”