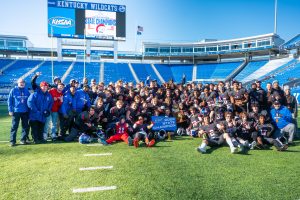 State Champions!! The CAL Varsity Football team was crowned the 2022 KHSAA Class 3A State Champions on Saturday afternoon after shutting out the Bardstown Tigers, 38-0, at Kroger Field in Lexington, Kentucky. The Centurions cemented their perfect 15-0 season, just as they had during most games this year, by leading with enough point differential to initiate the running-clock mercy rule against their opponent.

In his final game as a Centurion, senior Gavin Copenhaver was named the championship game’s Most Valuable Player, having led the Centurions on both sides of the ball with 225 yards rushing, two touchdowns, and eleven tackles. Junior quarterback Cole Hodge threw for 172 yards and three touchdowns. Hodge connected with his younger brother, Connor, on five occasions for 64 yards and one touchdown. Sophomore Trey Cotton had three receptions for 71 yards and a touchdown, and junior Malachi Embers had one catch for a touchdown. Senior Jack Barrickman scored by kicking three extra points and a field goal.

The Centurion defense quieted any doubters by shutting out a team that had not gone scoreless in a game since 2018. CAL held the tigers to 121 yards passing and 114 yards on the ground. In addition to Copenhaver’s eleven tackles, seniors Nate Heidenreich and McKade Battcher each had 5.5 tackles, with three tackles for a loss. Senior Gunnar McKinley and sophomore Connor Hodge both had 4.5 tackles, with Hodge grabbing the game’s only interception. Senior Isaac Patrick finished with four tackles and a forced fumble.

Congratulations to the CAL Varsity Football Centurions for an incredible season and for winning the 2022 KHSAA Class 3A State Championship!